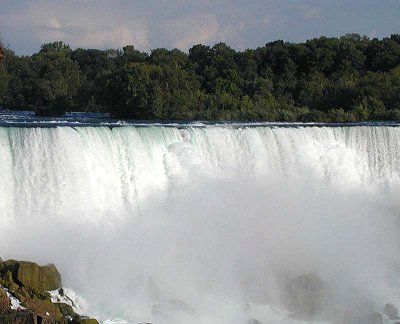 The beauty of such sights as Niagra Falls is in the awesome display of nature's power. Intuitively, we sense the power manifest in this earthly wonder. However, when it comes to the power of a machine, our understanding is less intuitive. We live in a world of old wive's tales and myth. Motorcycle enthusiasts in particular are guilty of under-appreciating and misunderstanding power. In this article, I want to explore the meaning of power.

The Nature of Power
What is power? Power is a little mysterious. To begin with, it is not a single thing, but actually a combination of things. Three things, to be exact. The first ingredient in power is force. Force is often measured in terms of pressure. Whether Niagra's tons of water, the electromotive force (EMF) in "voltage," or the pressure of combustion felt by the piston -- force is the beginning, the prime mover, so to speak, within power. Force is where power begins. However, make no mistake, force is not itself power. The next ingredient in power is distance. Niagra's water falls 180 feet, electricity moves at a rate called the coulomb (6.28 x 1018 electrons), and the engine pushes its piston a certain linear distance. Take any one of these distances and combine it with the starting point, force, and you will have something called work. A very useful thing, work. However, we still do not have power. A third thing is needed, time. To know that Niagra moves over 5 billion gallons of water an hour is to finally put into perspective its awesome power. But let's simplify this thing. To visualize these three ingredients of power together, let's imagine that a road crew member is shoveling dirt. Each shovel-full weighs 13ľ pounds. Sure, that's weight, but did you know that it is also force? Now, our crew member deposits each load of dirt onto a heap about 4 feet away from where he is digging. The 4 feet is the distance. Now we have two of the three parts. Combined, the force and distance constitute 55 ft-lbs of work. Work is going on, which is no surprise to the sweating workman! Now let’s insert the third ingredient, time. It takes our worker one second to do each shovel-full -- that's our time element, giving us 55 ft-lbs per second. Now we have all three ingredients -- force, distance, and time, and tada! -- we have power.

"Horse" Power
Neato mosquito, but how much power? Good question. When during the late 19th century the Western world's agrarian society began morphing into an industrial one, the leaders of this mechanical revolution needed to measure the ability of the machines that would replace the historically reliable power source, the horse. So they compared these new machines to the animal. Thus the power rating of a machine was established as the "horsepower," which was declared equal to 550 pounds moved one foot in one second (550 ft-lbs per second). That is, every 550 ft-lbs per second equals one horsepower. Our worker's 55 ft-lbs per second sounds like one-tenth as much, and it is. He is producing 1/10 horsepower.

The Building Blocks of Power
So power is made up of force, distance, and time. But how does that work inside the engine? How does the one-dimensional force on the piston turn into the three-dimensional power at the crankshaft? Let's follow the movement of energy from the combustion chamber to the crankshaft, and hopefully we will see.

Force: Piston Force
Many engines produce a peak cylinder pressure of over 1000 psi. But the engine sees this maximum for only a brief moment. Average production engine cylinder pressures are typically around 140 psi. This average cylinder pressure has a fancy name, Mean Effective Pressure (MEP). However, MEP is just the force before it reaches the piston. Let's not forget that the piston is a rather large object. Its size affects the total force felt by the engine's parts. For example, a 3 1/2" piston taking up a little over 9 1/2 square inches feels a force of over 1300 pounds. That is, the force produced by combustion is multiplied by the piston's area.

Distance: Piston Stroke
So we have a very big push on the piston, and that's the engine's actual force, but that's just the beginning. The piston's downward movement must be considered also. Distance, remember, is one-third of power. The piston's stroke transfers its energy through a distance dictated by the crankshaft. Given for example a 4 1/4" stroke, our 1344 pounds of force turns into 476 ft-lbs of work. However, we still don't have power -- just work. But we're two-thirds of the way there.

Time: Power Pulses per Minute
Finally, we add the time element. Time is very important. As noted earlier, without it, our engine produces only work, and not power. Thus far, combustion's mean 140 psi has pushed on 9.6 square inches of piston to exert a total of 1344 pounds for a distance of 0.354 feet, to produce 476 ft-lbs of work. This is a lot of work, but it's not power. Should our hypothetical engine make its power at 5,000 rpm, and should it be a four-stroke, its power pulses will be limited to every other revolution, giving it half as many power pulses in a minute as its rpm, or 2,500 of them. Thus our 476 ft-lbs of work multiplied by this 2,500, which represents time, results in a power of some 1,190,000 ft-lbs per minute. That's the power of the engine. Hmm. Doesn't sound like horsepower does it? It's not. However, the engine's horsepower is easily found by dividing this answer by 33,000 (the number of ft-lbs per minute in one horsepower), and finally we arive at a power figure for our engine of 36 horsepower.

So What?
An interesting exercise, but does it have any practical value? Yes, it does. Because we have just described an equation, PLAN divided by 33,000. P is MEP. L is equal to the stroke, and A is equal to the piston's area. N is the number of power events per minute, derived from rpm. We can use this equation a number of ways.

MEP
Let's say we decide to hop-up our engine. We want it to produce 46 horsepower, and we expect to gain this 10 hp increase through increased efficiency throughout the rpm range resulting in additional MEP. How much MEP is needed? The equation indicates that 178 psi will have to be developed to increase our engine's power from 36 to 46 horsepower.

Rpm
Maybe we would rather rely on rpm to get our power gain, through modifications that make the engine more efficient at higher engine speed. How much rpm is needed? The equation indicates that if properly modified, 46 hp can be developed by our engine at 6,381 rpm.

Big Bore
What if we wish to gain this 10 hp increase through the timeless expedient of boring out the cylinder? How much overbore will be needed? Our equation gives us the answer. Our new cylinder will have to be 3.950" in diameter.

Stroker
Finally, what if we are able to increase our engine's stroke? How much stroke will be needed to get to our 46 hp goal? The equation provides the answer. Our engine's new stroke will need to be 5.421".

Summary
Is it really this simple? Yes, it is. In fact, the modifications indicated will actually be somewhat more effective than the equation promises, because the equation speaks only of the mechanical elements in power production and addresses none of the chemical or other physical components such as charge speed. Also, while the changes indicated seem disproportionately large for the power gain realized, that is only because we are dealing with so little engine power to begin with. That is, taking our hypothetical engine from 36 to 46 horsepower represents an almost 30 percent increase in power. Looked at in that light, 38 psi more MEP, 1,400 more rpm, a half inch bore increase, or an increase in stroke of over an inch, really don't look all that radical. They are radical only because we're using only one mechanical facet of the engine at a time to get that huge power increase, and because the engine is very low-powered to begin with.

I trust you have found this article interesting and stimulating. If so, I would appreciate some feedback. Want more? Go here for a little more practical treatment of this subject. And for an even more practical exercise, try this resource.


Copyright (c) 1986~2015 Mike Nixon
All rights reserved. No part of this work may be reproduced
in any form without express written permission from the author.
Copyright notice.